Lightning is the visible discharge of static electricity within a cloud, between clouds, or between the earth and clouds. Scientists still do not fully understand what causes lightning, but most experts believe that different kinds of ice interact in a cloud. Updrafts in the clouds separate charges so that positive charges move up to the top of the clouds, while negative flow to the bottom. When the negative charge moves down, a “pilot leader” forms. This leader rushes toward the earth in 50 meter discrete steps, ionizing a path in the air. ‘The final breakdown generally occurs to a high object, the major part of the lightning discharge current is then carried in the return stroke which flows along the ionized path.

A lighting protection system provides a means by which this discharge may enter or leave earth, without passing through and damaging non-conducting parts of a structure, such as those made of wood, thatch, brick and tile.

A lightning protection system does not prevent lightning from striking; it provides a means for controlling it, and preventing damage by providing a low resistance path for the discharge of  energy.

Apart from the devastation that a Lightning strike causes, it is absolutely unpredictable. SA Lightning encourage you to ensure the safety of you rloved ones and property by installation Powerful Lighting Protection systems earthing and lighting arresters.

Like all Acts of God, it causes Billions in losses annually. But unlike other natural occurrences, we can successfully and economically protect ourselves against the onslaught of nature. 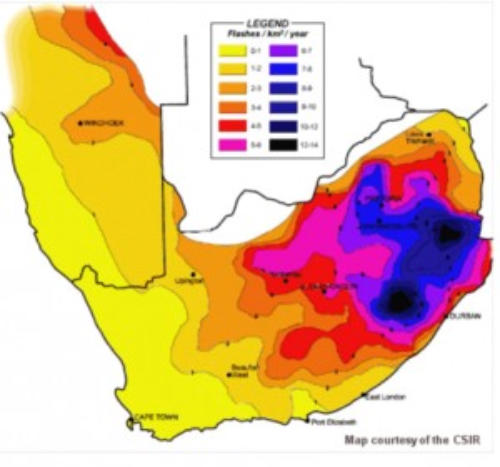